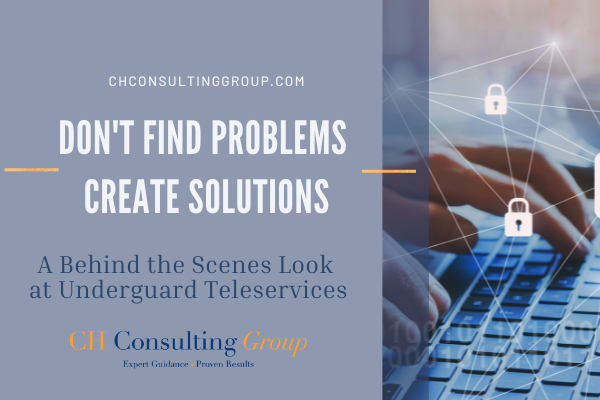 A Peek Behind the Curtain into UnderGuard Teleservices with Christa Heibel

As someone who started out as an agent on the floor, I can say this with absolute confidence: the contact center is NOTHING without its agents. What never ceases to amaze me about this industry I love, and at the same time is something that I don’t think we often talk about or get recognition for, are all the unique opportunities we provide.

We are able to give opportunities to those that are new to the job market and second (even third) chances to those that are facing employment hardships and challenges. We are one of the few industries that are able to overlook traditional deal-breakers like employment gaps, and employ otherwise low-skilled workers and assist them on their career paths. According to Statista, the number of employees working in the contact center industry in the United States increased overall between 2014 and 2020, despite some fluctuations. In 2020, there were around 2.83 million people working in call centers in the United States.

That’s pretty impressive if you think about it — almost 3 million opportunities in the U.S. alone, not including the millions of opportunities that the contact center industry opens up worldwide in countries such as the Philippines, India, Mexico. But how are these opportunities making a difference in these contact center workers’ lives? While I can’t possibly answer for everyone, I can at least shine a light on one specific demographic–the women at the Underguard call center operation in the West Tennessee State Penitentiary.

Before I dive into who Underguard is and all the amazing, life-changing work they are doing, I’d like to set the stage for you. Did you know that the US has the highest incarceration rate in the world, and that 1 in 5 incarcerated people are in jail or prison for a drug offense? And that 77% of drug offenders are back in the prison system within 5 years of release? I don’t want to get into the politics of drugs and the prison system in the US, but I do want to point out that prison has become a tragic revolving door for many of those who face drug-related charges. Many of these men and women lose their families, homes, and careers as a result of their incarceration and addiction. When they are released from prison, many are literally sent away with nothing but the belongings they came with and a bus ticket. They are often ill-equipped to return to society, and face several barriers such as finding employment with a criminal record and little to none professional job experience. As a result, they often return back to their life of crime and eventually prison thus continuing the vicious cycle of poverty, incarceration, and addiction.

At the intersection of a troubled prison system and the need for inmate rehabilitation is one innovative and compassionate solution: Underguard Teleservices. Underguard is a contact center facility that employs women in, or recently released from incarceration. The Vision of Transforming Prisoners into Productive Citizens came to reality in 2017 by the late Casey Hannah – a man on a mission to leave the earth a little better than he found it.

Mr. Hannah was a one of a kind entrepreneur who turned his life from drugs and crime into a life based around serving others. He coined the term “smart sourcing” to mitigate common call center problems such as rising labor costs, high employee turnover, and talent acquisition. Underguard is a creative solution for the labor shortages that many contact centers have been facing, which is a great win-win for all. But more importantly, Mr. Hannah and the Underguard facility plays a huge, crucial role in the rehabilitation and reformation of incarcerated women in Tennessee–many of whom are incarcerated for non-violent drug charges.

The progressive Underguard program prepares offenders to return to society and reduce the rate of recidivism by training them in current job skills, allowing them to make and save money in preparation for their release, and providing them with employment opportunities after their release. In short, it is life-changing, inspiring, and uplifting work for all those that are involved. Underguard helps to break the cycle of incarceration, addiction and poverty by providing inmates with the skills they need to return to society successfully.

I have a big heart for organizations like Underguard that actively work at transforming their communities through job skill development and leadership development. I’ve personally witnessed how they are molding and shaping the lives of these impressionable women, and feel inspired by their culture of change and reform. At the end of the day, these prison inmates are still people–they deserve a chance at a better life. I love and appreciate all the work Underguard is doing, which is why I say– this is NOT the end!